I’m going to kick off this blog with a work that stretches (there’s a pun there) the idea of what a comic is. The Great War by Joe Sacco is a single panoramic image that’s folded accordion-style into 24 8″x11″ panels. If you lay it out unfolded [as I have done in the video below, shot rather amateurishly], it extends 22 feet from edge to edge, with an additional 2 feet, almost, for the inside front cover and the frontispiece.

Sacco is one of the greatest contemporary comics creators, and has taken the documentary comic to a level paralleling the best of non-fiction writers. His work has appeared in Time, the New York Times Magazine, Granta, the Guardian, and many other top-rated print media products. His longer comics, such as Palestine and Safe Area Gorazde – about ethnic cleansing during the Bosnian War – are vital chronicles of those conflict zones.

The reason for the acclaim for his work is the rigour with which he documents what he sees. His journalistic eye catches everything in the scene with accuracy and detail, and using the illustrative medium allows him to go further into the minds and lives of the people he meets than photography would.

You can see these traits in his rendition in ‘The Great War’ of the events of July 1, 1916, the first day of the Battle of the Somme. Based on intensive research, Sacco has depicted the horrific events of that day with inch-perfect authenticity.

Taking his inspiration from the Bayeux Tapestry and its sequential depiction of the 11th-century Norman invasion of England, Sacco uses the expanse of the illustration to depict a progression in both time and space. As you view it left to right, it moves from the Montreuil-sur-Mer headquarters of General Douglas Haig, commander of the British forces on the Western Front, through the trenches and battlefields of the Somme, eventually to burial sites in the makeshift cemeteries on the Allied-held ridges.

But the comic also progresses in time as you traverse its length, starting with General Haig on his daily rounds, and moving to preparations for the Big Push, then the start of the Allied bombardment of the German lines on June 24, the massing in the trenches at the front, till the troops go “over the top” on July 1, and are slaughtered by machine gun fire and artillery shells, being brought back in thousands to ill-equipped field casualty stations or, if they are beyond help, to the cemeteries. As Sacco puts it in his Author’s Note, the vista opens up “what happened between the general and the grave”.

Looking at the illustration work is an immersive experience. There is so much detail in every part of the visual, you can spend hours looking at it all, adding your own imagined narrative to bits and pieces of the image. It’s like a massive Where’s Waldo? hunt for nothing in particular; one in which you tease out the panorama’s secrets for yourself. Here, a little dog yaps excitedly at a soldier walking past; there, a column of turbaned lancers ride through into the night. Elsewhere, a little light illuminates the inside of a bunker in the darkness. Once you get to the parts that show the suicidal attack, you can easily get invested in the fates of individual Tommies being carried or dragged out of harm’s way.

It’s a harrowing tale, brought starkly to life by the black-and-white ligne claire (clear line) images. The Battle of the Somme was one of the most horrific in the annals of war, with more than 57,000 British soldiers dead or wounded on the first day itself, along with some 8,000 German casualties. By the time the offensive petered out in the November mud, Great Britain had lost 400,000 men Germany 335,000, and France 200,00. All for an advance of 15km on the part of the Allied forces! If there were ever a tale of the futility of war, the Somme is it; and yet, 100 years later, it remains an ever-present threat hanging over so many nations.

Sacco’s wordless illustration can’t give you these facts, but there’s a powerful essay by historian and author Adam Hochschild in a booklet accompanying the comic that fills in the background. This booklet, whose pages also include a miniature version of the full visual annotated by Sacco to provide context if you are looking for it, and the hard-backed folded panorama are handily packaged in a hardcover slipcase.

The English-language version of the comic was first published in 2013 by W.W. Norton and Company in the US and the UK. A combined French-German edition was brought out the following year by Futuropolis. Thanks to the munificence of friends and family, I happen to possess both editions, and must say that I fractionally prefer the European one over the English. It feels a little better produced.

A final aside: watching last year’s World War I film ‘1917’ brought this work to mind, and I wondered if by some chance seeing Sacco’s art had sparked the idea of the (ostensibly) single-shot narrative in director Sam Mendes’s mind, but couldn’t find any references online that made this connection.

The Great War by Joe Sacco is available at https://www.amazon.com/Great-War-First-Battle-Somme/dp/0393088804/ 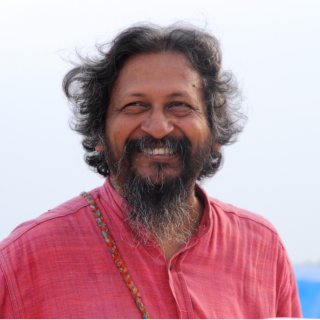 I write articles and books, design communication material, and develop quizzes and games. I live in Goa, India, with my wife Anjali and our dog Soulkadi. I can be contacted at anniesen01 [at] yahoo [dot] com